Type your search terms above and press return to see the search results.

Recently it’s been my pleasure to review some great books on nineteenth-century culture, especially the brilliant Thinking without Thinking by Vanessa Ryan. So I thought I would share some excerpts from my reviews. I can recommend all of these books and I’d love to hear about your own recent Victorian reads – please do leave a comment if you have a new favourite. For full reviews follow please follow the links below. All of these books are now available and can be purchased directly from the publishers or via amazon. 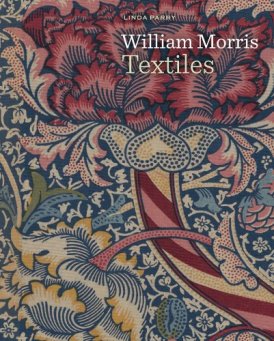 ‘Linda Parry’s revised edition of William Morris Textiles is the culmination of over thirty years of careful research and hands-on experience with the works of Morris & Co. in Parry’s former position of Deputy Keeper of the Department of Furniture, Textiles and Fashion at the V&A. The resulting work is as detailed and as satisfying as one of Morris’s designs.

It goes without saying that a book devoted to Morris’s designs is beautiful, but it is also an incredibly useful resource. With biographies of the key personalities involved with Morris & Co., reproductions of Morris’s preparatory sketches and notes from his experiments with dyes, and a chronological catalogue, which notes where both samples of the textile and the original design are held, this book will be invaluable to collectors of Arts and Crafts textiles, to researchers and students of design history and even to artists and designers of today. I would recommend reading this book alongside Fiona MacCarthy’s magisterial biography to gain a rounded understanding of Morris’s full and varied life, but one can imagine him entirely approving of the work and detail that has gone into this indispensible volume.’

The full review can be found in the most recent (July/August 2013) edition of The Art Newspaper.

‘In his preface to The Moonstone (1868), Wilkie Collins writes:

The attempt made here is to trace the inﬂuence of character on circumstances. . . . Their course of thought and action under the circumstances which surround them is shown to be (what it would most probably have been in real life) sometimes right and sometimes wrong. Right or wrong, their conduct, in either event, equally directs the portions of the story in which they are concerned.

The mystery of the missing diamond in The Moonstone is solved by the intervention of Ezra Jennings, who is able to interpret Dr Candy’s feverish ramblings to discover that the hero, Franklin Blake, removed the diamond from Rachel Verinder’s bedroom, while sleep walking under the inﬂuence of laudanum. The truth is revealed only when unconscious thought is taken into account. As Collins explains, the unconscious not only inﬂuences character, but also directs the narrative. Collins’s novels are the starting point for Vanessa Ryan’s study of how nineteenth-century sensation ﬁction and ‘psychological novels’ drew upon, but also inﬂuenced the signiﬁcant advances made in mind-brain science, or ‘physiological psychology’, in Britain from the 1850s onwards. Ryan traces the effects that these new theories had on the portrayal of character, but also on narrative form, or the story, as Collins puts it.

Ryan argues that the ﬁction of Collins, George Eliot, Henry James and George
Meredith seriously questioned the interiority of ‘inner’ thoughts and feelings, thereby
suggesting a radical redeﬁnition of the nature of thinking. As Ryan points out, these
writers draw our attention to inaccessible or unspoken modes of thinking: Walter
Cartwright’s uneasiness around Anne Catherick in The Woman in White (1859–60),
Maggie Tulliver’s apparently mindless rebelliousness in The Mill on the Floss (1860) or
Maisie’s unformed ‘almost knowledge’ in What Maisie Knew (1897), for example. At
the same time, scientists and theorists, such as Alexander Bain, Herbert Spencer,
Thomas Laycock, Henry Maudsley, William Carpenter and George Henry Lewes,
looked to physiology when building the foundations of a new science, psychology.
In doing this, they turned away from previous models of understanding the nature of
the mind, such as Cartesian dualism, the Idealist unitary ego and the British
associationist tradition.’

You can access the full review, published in Journal of Victorian Culture here.

And finally, you can read my review of Valerie Purton’s  Dickens and the Sentimental Tradition: Fielding, Richardson, Sterne, Goldsmith, Sheridan and Lamb (London: Anthem Press, 2012) on the excellent History of Emotions blog (extract below).

‘… The treatment of Dickens’ novels by some as ‘populist’ and ‘anti-intellectual’ provides the starting point for Purton’s study. Her introduction sets out the key questions to be addressed: Why have Dickens’ novels been labelled sentimental and why does this give grounds for dismissing the work? How can we define sentimentalism for Dickens and his Victorian readers? What is the after-life of the sentimentality in Dickens’ works and can this still be appreciated in the twenty-first century?

In her conclusion, Purton again draws on ideas from twentieth-century critical theory, in particular the work of Roland Barthes, which is discussed in relation to notions of affect and authorship/readership. Purton argues that the new possibilities opened up the work of by Barthes, Gilles Deleuze and others, has enabled a reassessment of sentimentalism. In turn this has fed into the twenty-first-century scholarly preoccupation with the history of emotions and their literary construction. Although the sentimentalism of Dickens’ work has often been attacked by critics, most prominently J.S. Mill, George Eliot and in the twentieth-century, Virginia Woolf, Purton argues that sentiment and melodrama need to be recognized for their cultural, if not their aesthetic, value. This response will strike a chord with many Victorianists working on literature, art and popular culture that is now considered beyond the pale The clear and elegant prose and logical and perceptive analysis make the book appealing and accessible to scholars and students alike, although there is little concession made to those who are not already familiar with Dickens’ life and work. Possibly revealing more about my own preoccupations than any gaps in Purton’s research, I often found myself wishing that she had mapped some of her ideas around sentimentality onto contemporary ideas about physiology and psychology. Nevertheless, this is an original and convincing book and successfully makes a case for a reassessment of the significance of Poor Little Nell and her sentimental companions.’